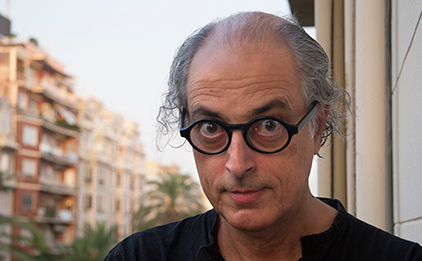 Ajubel (Sagua la Grande, Cuba , 1956).
Illustrator, satirical cartoonist, printmaker and graphic designer.
Ajubel moved to Spain in 1991. He currently resides in Valencia where he has his studio.
He has worked for the written press in prestigious newspapers and magazines in Cuba, Spain, England, Mexico and France, among other countries since 1973. He is considered one of the most important graphic humorists of the 20th Century in Cuba with 18 solo exhibitions and around 90 group.
He has received more than 60 awards in Cuba and 57 international in design, illustration, drawing, graphic humor and painting. The most important awards include two bronze medals and an Honorable Mention BND (Best Newspaper Design), United States, 1994. He received the National Award for Best Illustrations of Children's and Juvenile Books published in 2003, presented by the Ministry of Culture of Spain. He also received the unique award and invitation for creating the new international image of Wines from Spain, convened by the Institute of Foreign Trade of Spain (ICEX) in 2003.
Ajubel’s work with the Publishing House Media Vaca was awarded the Bologna Ragazzi Award in 2009 for the book Robinson Crusoe, a graphic novel with “pictures inspired by the work of Daniel Defoe”, in the category of fiction. Robinson Crusoe was selected among the top 250 most important books in the world by the White Ravens List (2009). This book also won the unique award in its category in the international competition Titan, Portugal in the Artwork and Books category (2009) and was also awarded at the 2nd CJ Picture Book Awards, Korea (2009). Ajubel was one of 50 finalists to the Second Prize of illustrations (2009). Robinson Crusoe was published in France by Editions Plume de Carotte and in Korea by Open Books
Ajubel was selected to be part of the exclusive exhibition Illustrarte in Barreiro, Portugal (2009).
Ajubel has been invited by Open Books to design and carry out the complete works of the Chilean author Roberto Bolaño.
Ajubel has been invited to participate alongside 73 other professionals in the Illustrious International Exhibition, Illustration Children's Panorama in Spain, which is the guest country for the event that will take place in Bologna, Italy in 2015.
His version of The cat that walk by himself was selected by the Apple Company for the international presentation of the iPad Mini, and considered as one of the five best books of 2012 made with iBooks Author.
Currently, Ajubel holds conferences and international workshops on creation of picture books, illustration in press and how to do Apps.
He coordinates and directs several teams of design work and creation of Apps.
For further information email us at This email address is being protected from spambots. You need JavaScript enabled to view it.